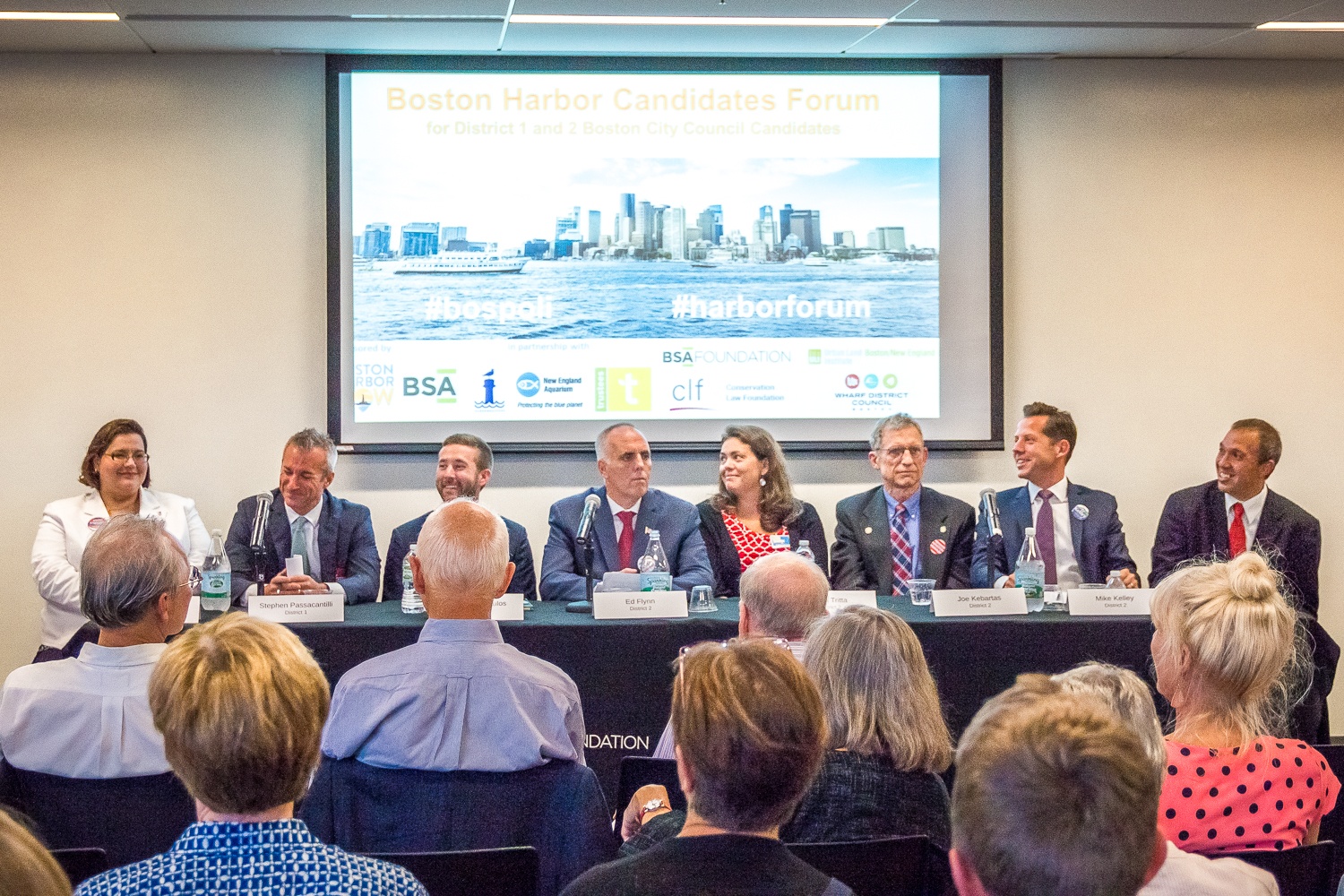 The Boston waterfront is home to some of the most important policy discussions happening in the region – including around a building boom, rising sea levels, and aging infrastructure. In the midst of this key moment for Harbor planning, not one but two waterfront Boston City Council seats are opening up for the next session.

On Tuesday night, candidates hoping to represent Boston’s harbor neighborhoods sat down to discuss issues concerning both Districts 1 and 2 as well as Greater Boston. Boston Harbor Now, the Boston Society of Architects, and the BSA Foundation organized the panel around questions of development, design, water transportation, climate change, resilience, equity, and access for all.

The forum laid a foundation from which further conversation can grow. The candidates addressed their neighbors’ concerns in a public setting, and the discussion spread beyond the confines of the event itself. Partner organizations Conservation Law Foundation, Harborkeepers, the New England Aquarium, the Trustees of Reservations, the Urban Land Institute Boston/New England, and the Wharf District Council helped organize and publicize ideas –bringing valuable insights and ideas to the table.

Though some candidates already have already included waterfront priorities in their platforms, the forum encouraged greater detail and helped sharpen for voters the candidates’ positions on a range of issues.

At the forefront of everyone’s minds was the question, “Is Boston ready for a Hurricane Harvey?” From the candidates, the response was a unanimous “No.” The details of how the city should gird itself for rising storms and seas differed from candidate to candidate, with some citing discussions of a Harbor wall, and others wary of a barrier’s limitations. Many advocated putting more pressure on developers to build for the future. Their hope is that by ensuring new construction is flood-ready and environmentally conscious people will be able to live in waterfront neighborhoods for generations.

All candidates agreed that Greater Boston’s streets are more congested than ever. Their voters wanted to know what steps they would take to help them move more freely. Candidates weighed in on mandatory parking allotments for housing units. They debated whether or not alternative forms of transportation could be made attractive and viable. When pressed as to whether they would prioritize infrastructure for bikes, buses, and other modes, the candidates varied in their thinking. However, each expressed strong support for better water transit—not only to cut traffic, but to help the city as it adapts to rising sea levels.

Waterfront neighborhoods are at the forefront of Boston’s building boom. The candidates reflected their constituencies’ mixed feelings about increased development and its effects. In one way or another, all pledged to work with developers towards building solutions that are resilient and promote inclusiveness. More discussion of what neighborhood-approved planning looks like, and how to integrate public access with commercial development will echo through the campaign season. Many candidates lauded the importance of providing for a variety of uses— from open space to affordable housing to storefronts—that address quality of life concerns for all.